A lot of our office life is centered around coin shows. I book the flights and hotels, they go and bring back boxes of coins, I scan in all the new inventory, and it would move along the line to be made ready for auction. Then the process would happen all over again, sometimes within the same month. The guys would occasionally complain but still seem to have a good time and do a lot of business in only a few days, all while in interesting cities.

After two years of working here, I asked if I could go experience one from the other side. Maybe I would hate it. Maybe I would find my true calling. How would I know if I didn’t go and see what it was like? JB said yes to my request, I booked my hotel and flight and I was off to the Summer Baltimore Show (with supervision, of course).

The first thing I learned about coin shows was that some business was not done AT the coin show. We arrived at Baltimore Wednesday afternoon, and the show didn’t even start until Thursday morning. After checking into our hotel, we saw dealer after dealer, and I was finally putting real names and faces to company names that I had been seeing for the last two years.

We met up with Mike and JB who had to fly in later and convened for dinner at Fogo de Chao Brazilian Steakhouse. One rule that Jason told me that morning was if I was hungry that I should say that I was because it still might be a while before I get a chance to eat. The last time we had eaten was at airport that morning, so by the evening I was STARVING. If you’ve never been to a Brazilian Steakhouse (as I had not), the main attraction is the skewers of meat that they bring to your table and cut off pieces right onto your plate. They give you a coaster that is green on one side and red on one side, and they will bring you meat if the green side is up and ignore you if the red side is up. A literal red light/green light game of meat, if you will. It was awesome. My interpretation of earlier said rule was that if I’m not going to eat at normal intervals, when I do eat, I should eat like I mean it. And oh boy, did I. It was a good thing we walked to dinner so that I could walk off at least a few of the calories I inhaled during that meal.

Thursday morning came early because we needed to set up our booth before the show, which was a process I was excited to see. There was nothing truly thrilling about it, especially if you asked Mike or Jason, but nonetheless I was pumped. It may have been because I had an iced mocha for breakfast, and I never drink coffee, but that’s beside the point. Walking into our area of the convention center, I thought it was huge. I had heard from dealers talking yesterday that some people weren’t coming, especially since the Long Beach Show had been the previous week, but the number of tables that lined the floor was still overwhelming. I later found out that this was the smallest and least-attended Baltimore Show, which just made all the other ones seem much more daunting.

The morning went by quickly with setup and then the ebb and flow of dealers coming with coins to show JB. After the deal was done, the coins and paperwork were given to Mike and I to process. We had Subway for lunch, I again going against normal eating habits, got a footlong and ate the whole thing. The floor opened to the public at 12pm, and we got an influx of collectors looking to buy. I stayed pretty rooted to my spot in the back of our booth, nervous I would accidentally sell a $1,000 coin for $100 somehow, but I watched how it was done so I would pick up on the tricks of the trade.

I got to walk around the floor some by myself during a lull to finally take in the show in all its glory. The rows upon rows of tables made me feel like a collector could spend days in the show and still never see everything. Walking the concrete floor in my comfortable shoes (something that was ingrained in my head before I left), I noticed there was a surprising amount of jewelry and other artifacts for sale that would interest even the most coin-illiterate, like myself. It was fun to see some of the dealers I had met yesterday, friendly faces in a sea of numismatic-minded people. One of my favorite things, besides the colorful floral shirts, of which I have only ever seen in Honolulu, was the tinkling sound of people rummaging through a bin of raw coins. It sounded like what you hear in movies when a pirate opens his treasure chest and gold coins spill out, and it was the perfect simple harmony over the melodic hum of the show.

Thursday night I finally got to enjoy the city I had been in for over 24 hours. Even though Mike had visited Baltimore more times than he can count, he graciously showed me most of the touristy things to see on the harbor. The Aquarium and ship tours were already closed, but I made mental notes on what to do when I came back with my husband for a vacation. 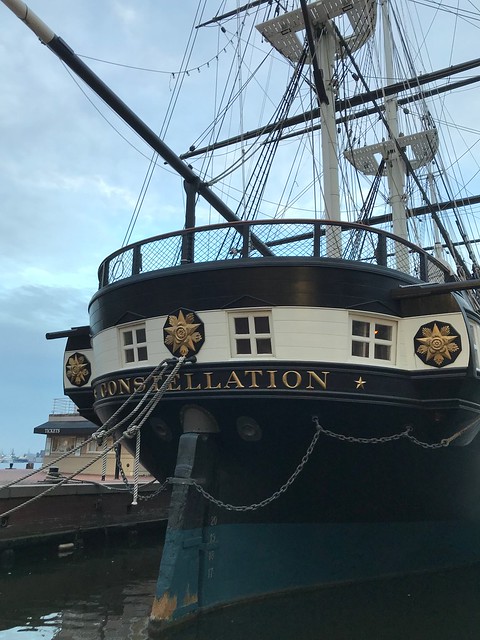 Friday morning, we walked to the convention center with all our belongings, and the floor opened to a significantly slower start than the previous day. I was shocked that I had so much free time that I could edit an entire Coins We Love email that we sent out that afternoon. I attribute some of it to the fact that JB had already left Thursday night, but this lack of action did confirm what everyone was saying about this being a slower show. Some of the dealers didn’t even stay until the end of the day.

After we left the convention center with more suitcases than any normal person should ever have, the rest of our day was just wasting hours in the airport, eating dinner like I meant it, arriving in Norfolk in a downpour, dropping off the coins at the office, and then I was home!

It took a whole weekend of not leaving the house, sleeping in, alone time in which my husband had to leave our house, and eating normal person sized food portions to recover. And it was completely worth it. I enjoyed every minute of the travel and work and business, and I would do it again in a heartbeat. I’m going to the ANA World’s Fair of Money in August, and I cannot wait.